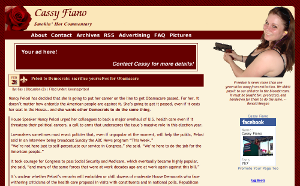 Cassy Fiano (now Cassy Chesser) began blogging back in 2007 on Blogger. She worked hard to network with other bloggers, wrote prolifically, and gained a large audience with her coverage of life issues and of Sarah Palin as the first female Republican vice-presidential nominee.

With her success, Cassy was quickly outgrowing Blogger. She was interested in moving to a different platform; specifically, Movable Type, as she had some authoring experience with that platform.

We migrated her content to a WordPress site, and customized a theme to look very similar to her Blogger theme (which she liked). We maintained the site, and began hosting it a few years later.

Initially, we assisted her with finding a theme, and customized it. We also modified her old Blogger template to send redirect users to her new blog after displaying a note that the blog had moved. A few years later, we developed an advertising banner to generate income from her writing.

In July 2012, we began hosting the site, as we were already hosting her military wife blog Hard Corps Wife. When the time came to decommission the site, we backed up the data and ensured she had it.