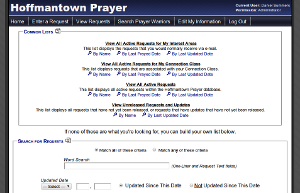 Our existing client Hoffmantown Church in Albuquerque, New Mexico, with whom we had worked on the Not So Extreme Makeover: Community Edition

Hoffmantown had seen the use of this physical prayer room dwindling over the years. People had become less willing to drive to the church, especially at night, and security became an issue as well; either prayer warriors had to know how to disable the security system, or the church would have to remain unlocked.

The development of Virtual Prayer Room extended the prayer room to anywhere a prayer warrior can get an Internet connection! Prayer warriors could enlist right from the site, and had to be approved. Requests and updates were tracked by date/time, and warriors could record when they've prayed for a request from the site, or from clicking a link in the daily e-mail they received with requests from their interest areas. As many prayer needs are confidential, security and confidentiality were very important. Virtual Prayer Room ensured these by providing varying security levels for prayer warriors and the ability to mark each request as confidential.

In 2016, Hoffmantown Church elected to begin using another package for their prayer requests. While a few other churches had expressed interest in it, none ultimately decided to use it; so, in 2017, Virtual Prayer Room was officially decommissioned.